As a submarine pilot and National Geographic Explorer, Erika Bergman is a passionate storyteller. She studied chemical oceanography at the University of Washington while working as a diesel engineer aboard the tall ship SV Lady Washington and a steamship engineer aboard the SS Virginia V. Since then she has worked as a submersible pilot for exploration, research, and filmmaking. Erika is an editor on OpenExplorer.com, a site dedicated to supporting and curating a new era of connected, citizen exploration. She is also the Founder of GEECs - Global Engineering & Exploration Counselors; providing a network of thrilling engineering camps to girls around the world.

Surprisingly complex question - I was born in San Antonio Texas however I moved often as a girl. We lived in Texas, Florida, Washington, and Hawaii. In high school I applied to Rotary International as an exchange student and was placed in Tegucigalpa, Honduras. So I also consider Central America part of where I was raised, I grew up very quickly in that year. 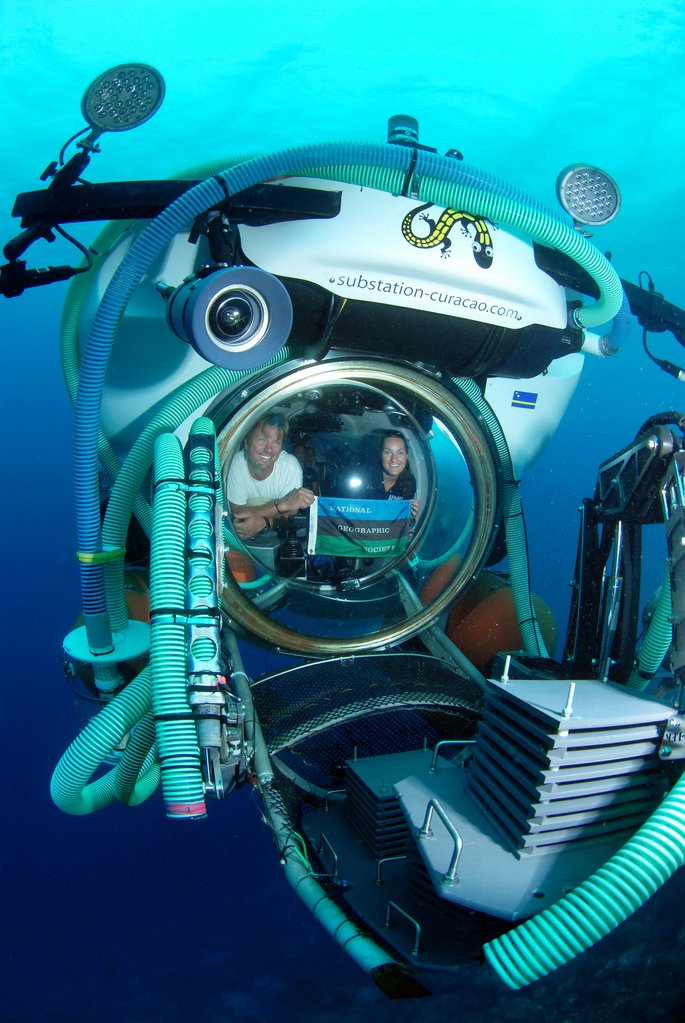 I feel like mixed families can be very good for childhood development. I grew up the youngest between remarried parents and various step-siblings. I’m grateful for them all now, but certainly at the time we all learned how to cope with personality differences. My entire family always encouraged me to march to the beat of my own drum, and they continue to be pillars of support. I spent long stretches of time as a girl on my own in the woods and jungles of Washington and Hawaii. I had pretty standard farm chores, feeding cattle, mowing the lawn, and painting buildings. I particularly loved anything I got to do with the tractor, I loved our John Deere tractor and made as many messes with piles of dirt and manure as I did tidy them up like I was supposed to. Bless their hearts my folks let me get as dirty and wild as I wanted, and let me adventure into nature with a machete as long as I took a dog. It was always, “Take the dog with you, and be back for dinner!” and I was off. It was a glorious childhood. 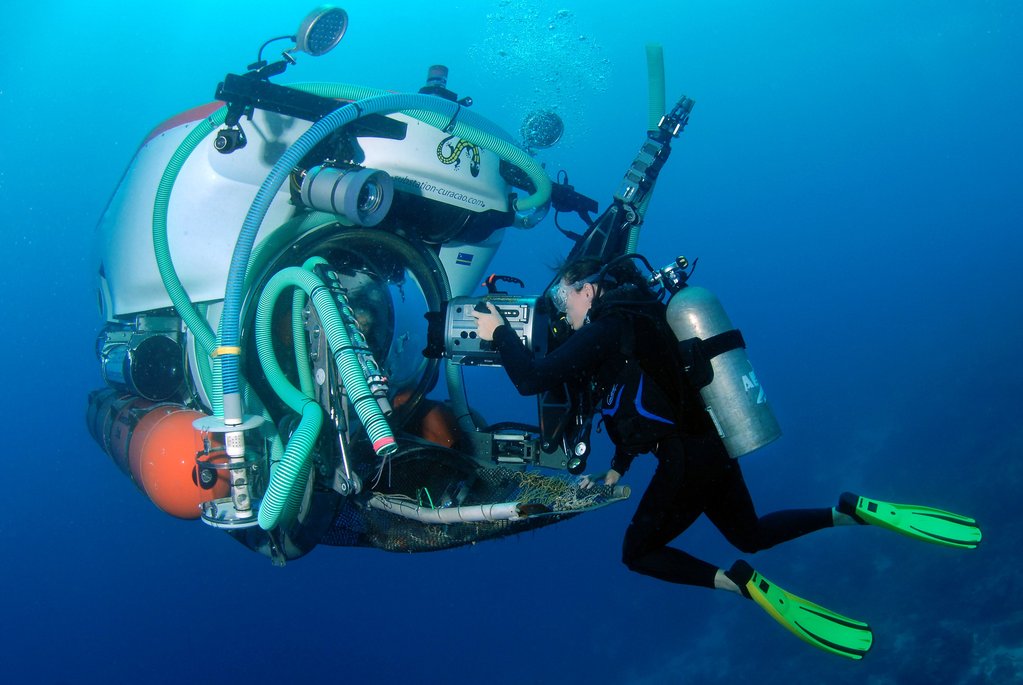 How in the world did you land on such a niche passion focused on oceanography, underwater robotics and marine and ocean exploration at such an early age?

“If you cut me I bleed cold, salty, clear.” I think that’s a line from an old sea shanty. I don’t think I can explain it much better, I’m a water person. I’m also a big nerd, so things with motors and engines, like ships, and marine robotics and submarines were just a draw I couldn’t escape. When we docked our tall ship next to a steam ship one summer when I was 18, I could hear the steam engine hissing and thumping and I was instantly drawn in. I simply HAD to go work on it. Being an steam engineer, a “fireman,” was everything I dreamed it would be. My domain was deep in a steamy bilge surrounded by huge thumping machinery. My job was throwing 15 pound diesel atomizing burners in and out of the steam generating “firebox” and locking them in place with a massive lever that seated with a really satisfying thud. I was just alone down there oiling all the pistons and pumps, getting all greasy, I was just so happy. Every new engine and robot gives me that same joy - it’s so tangible. Engines make things move, it’s that simple. 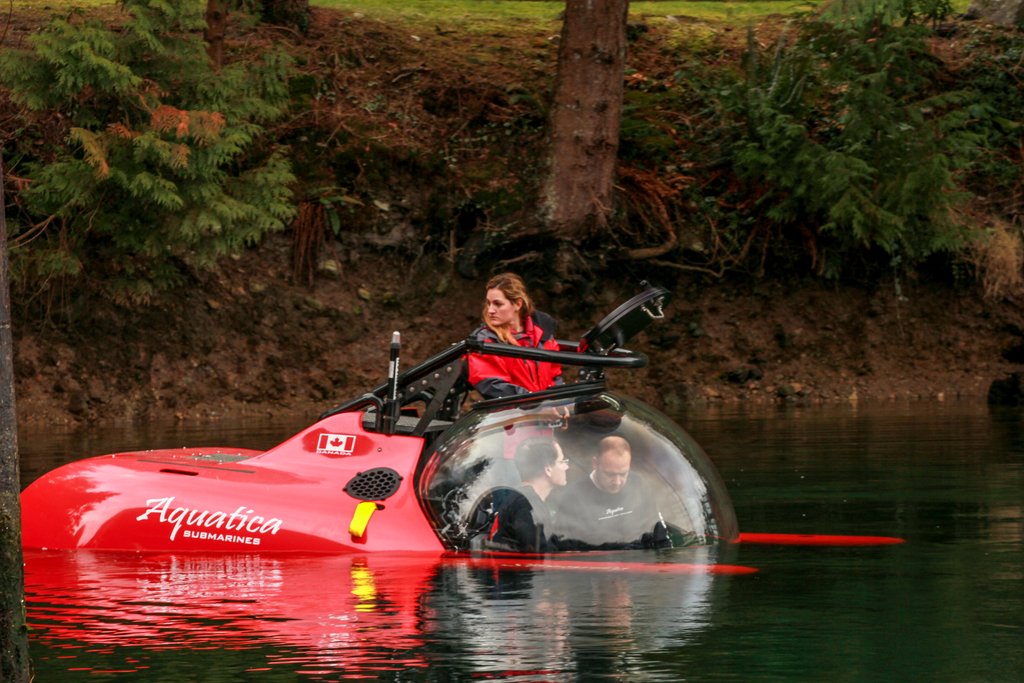 What are some of the primary issues do marine robotics and GEEC’s solve for?

The ocean is notoriously problematic for anything mechanical or electrical. The pressure, the salinity, the biofouling of instrumentation, a true list of the challenges would daunt even the bravest ocean engineering firms. We’re going to need an army of committed innovators to find solutions to these challenges. The goal with GEECs is the inspire a league of future ocean engineers who value a balance of pure conservation and sustainable resource management. The biggest issue, and easiest to solve in my opinion, is that we haven’t even explored the entire sea floor. GEECs enables girls to lead their own small scale mapping projects and inspires scientific questions for their future work. This develops the explorers of the future, but also adds to the sorely under developed network of seafloor data, topography, and ecology now. Double whammy. 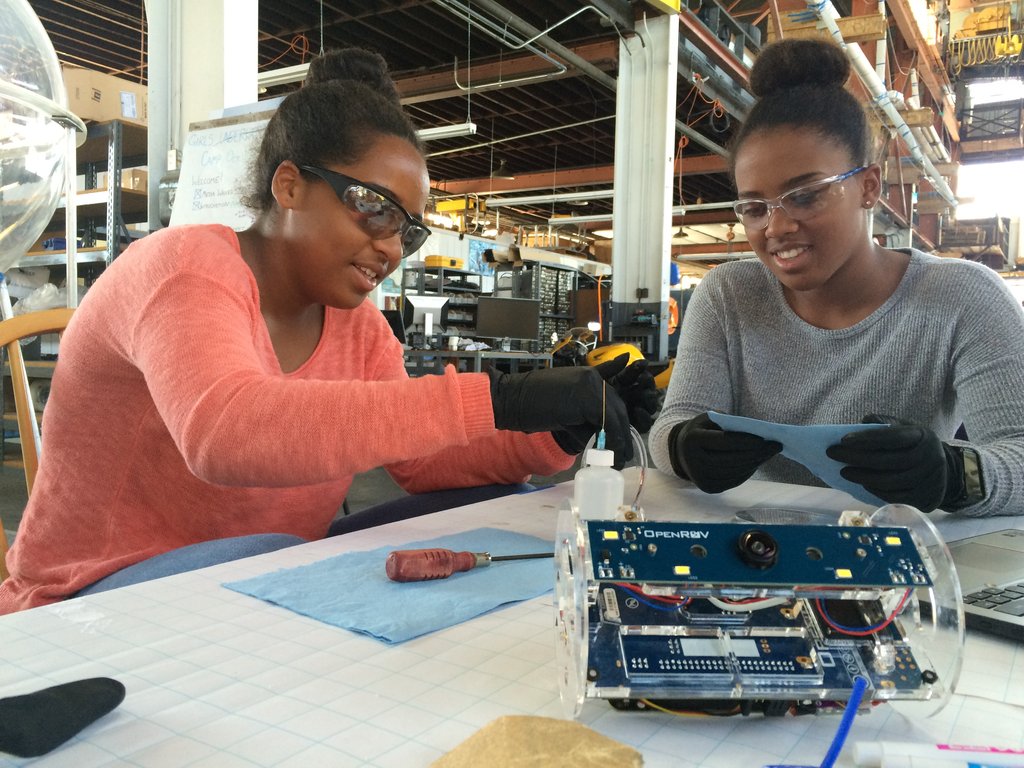 What are some of your most notable accomplishments? Humbly, how do you refer to yourself at this point? Scientist? Oceanographer? Marine Conservationist? With so many areas of interest, how do you find focus?

I think the most telling way to identify yourself is by the way people store you in their phone contacts. Without any suggestions, I’m often stored as “Submarine Girl,” so I guess that’s the best title for who I am.

Day to day, I call myself a submarine pilot. However I’ve been described as a renaissance woman of exploration, and I like that. The stellar thing about the ocean is that you really need to consider yourself all of those things (all of the above), to impact any one. The ocean is tied so tightly to everything on the planet, you must maintain a broad picture in your head of who you are, so that you don’t miss an opportunity to make an impact from a different angle.

My greatest accomplishments are in telling the untold stories of the ocean, and being a resource/reference for those doing conservation work. I go out there and produce films for national Geographic that tell the story of bizarre creatures of the deep to millions of viewers, but I also sit in a little huddle with 4 or 5 girls late at night at the aquarium and tell ghostly tales about being entangled and trapped underwater in a submarine (we came out of it just fine obviously, but the story is a good one). I don’t know which of those I’m more proud of, but my gut tells me it’s hanging with my young gal pals and dreaming of the amazing things they will accomplish in the future because of the night they camped out at the aquarium with the Submarine Girl. 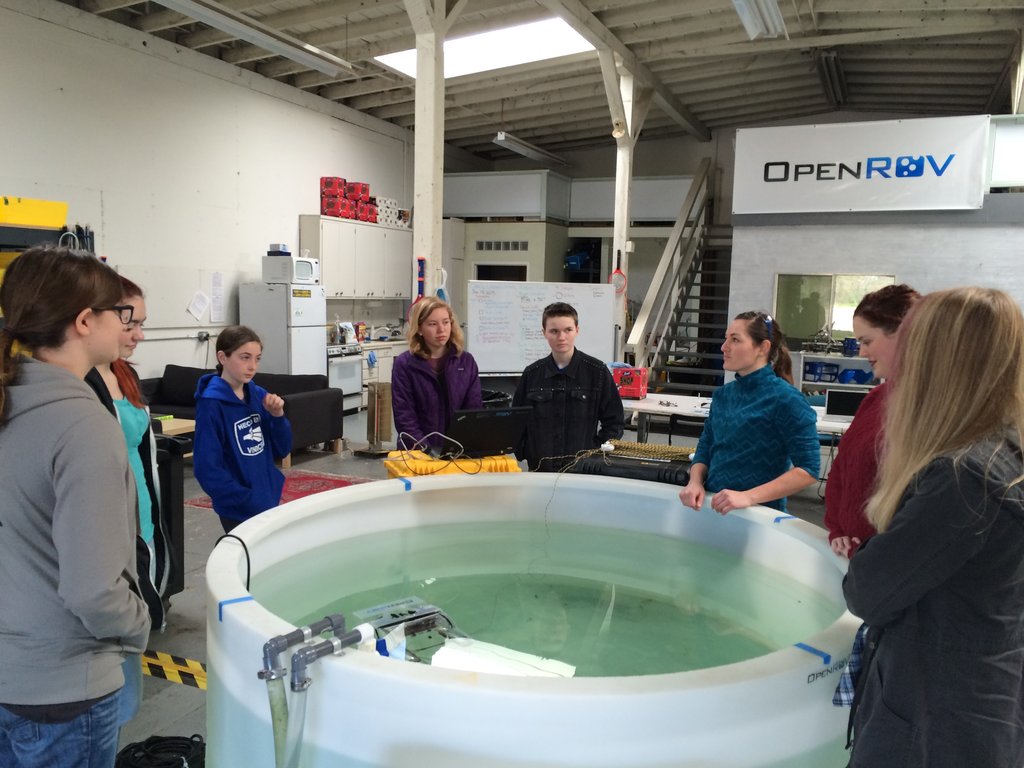 You appear to also be quite the filmmaker. How did you get involved with film?

Behind every great camera shot, is an engineer who scurried about assembling complex film rigs of tracks, and motors, and bicycles wheels and cables. With National Geographic filmmaking you take that engineering challenge and add distance, jungle heat, bugs, and language barriers, and you have the perfect bait to to draw out the wild child who played with tractor engines and dirt all through childhood.

I became a National Geographic Explorer by writing a grant to steam live skype calls from inside a submarine, no film challenge as daunted me more than that, yet. 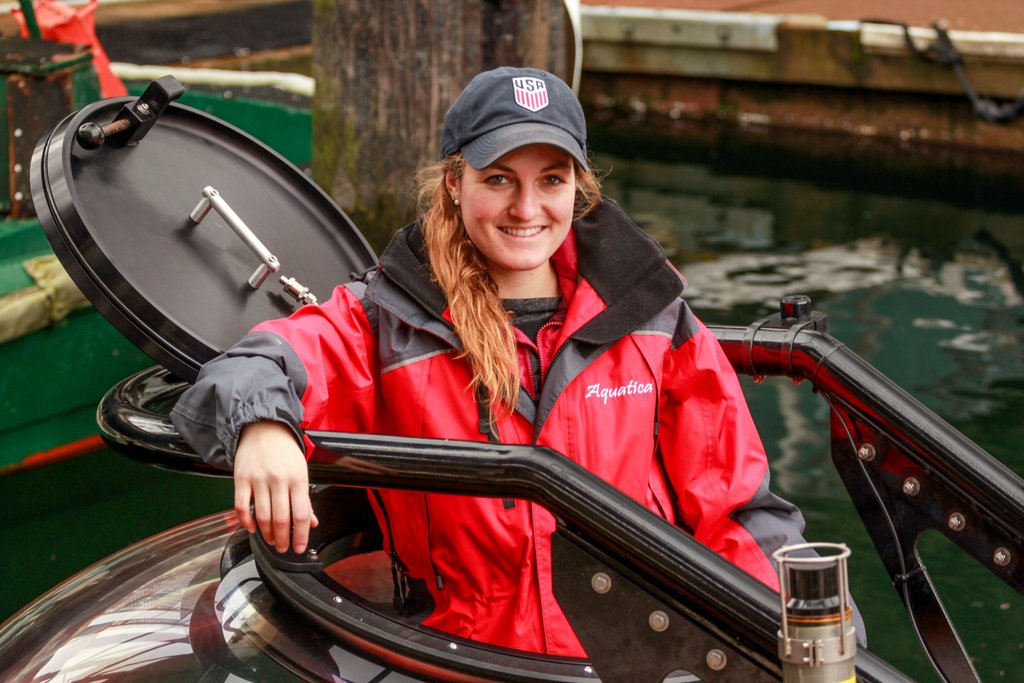 Your connection to the environment is evident. Can you tell us a bit about the environmental challenges you think are most pressing right now, and some solutions you believe would positively change the trajectory of our current world?

We’re ushering in a new era of human growth on our little planet. I think we will find ways to accommodate the food and resources needed for this gigantic population, but what we haven’t addressed enough is waste management. I spend a lot of time on the seafloor, and boy let me tell you, it is a garbage dump down there. We need to address our obsession with single use plastics and carefree and liberal use of garbage cans. I think the key lies in sustainable packaging, and sustainable clothing. Those two plastics are suffocating the ocean, and this will quickly come back to suffocate us. One of the solutions I’ve seen in the clothing sector, are sustainable blue jeans production. I had no idea how deleterious the blue jean manufacturing process was on the ocean, and the humans who make them. That’s an area that needs more storytelling. I would encourage consumers to get informed, and hold themselves to higher standards of clothing reuse. There’s a film called River Blue that bent my mind, it’s a good place for all of us to start. (riverbluethemovie.eco) 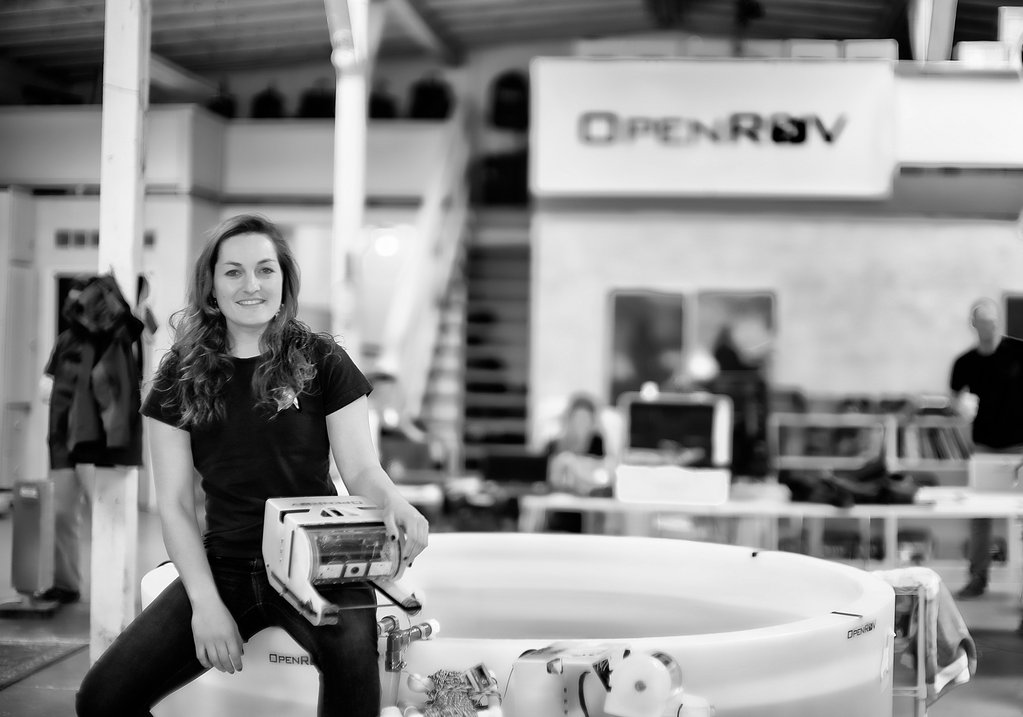 You work heavily with young girls, helping them to express their intelligence and explore a career in science without boundaries or limits. When you stand in front of the newest group of young, impressionable minds, what do you say? They could choose to follow the next a-list instagram celebrity, but they choose GEEC’s instead. How do you keep them engaged and influence their future?

I give them the opportunity to make their own instagram rival the awesomeness of any celebrity they look up to. I show them that they have star power.

I also do not coddle them, I hold them to a very high standard, and make it clear that every hope of success is on their shoulders. Not a single girl has let me down or made an excuse for a mistake. If you expect great things, they will deliver, and love doing it. 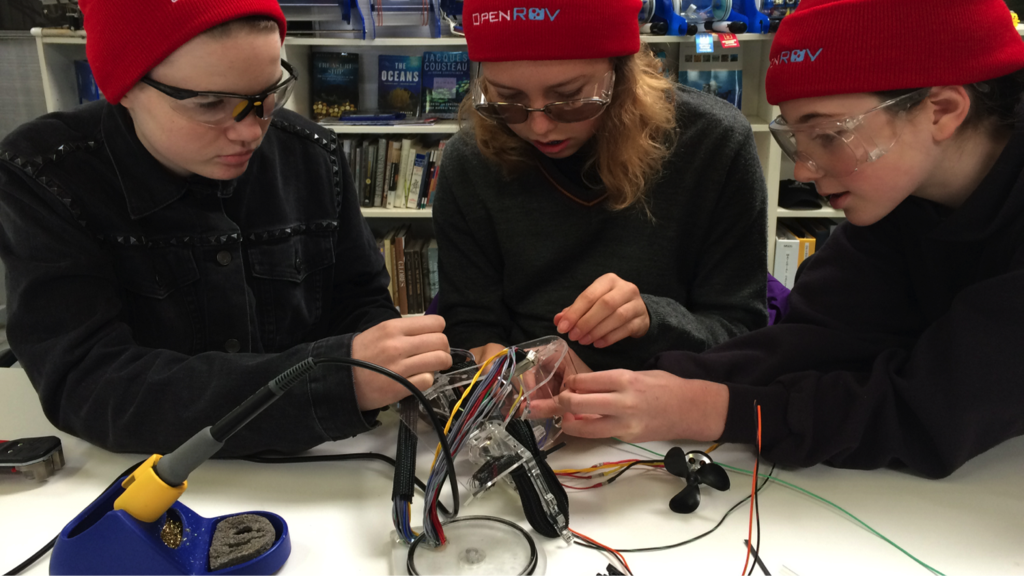 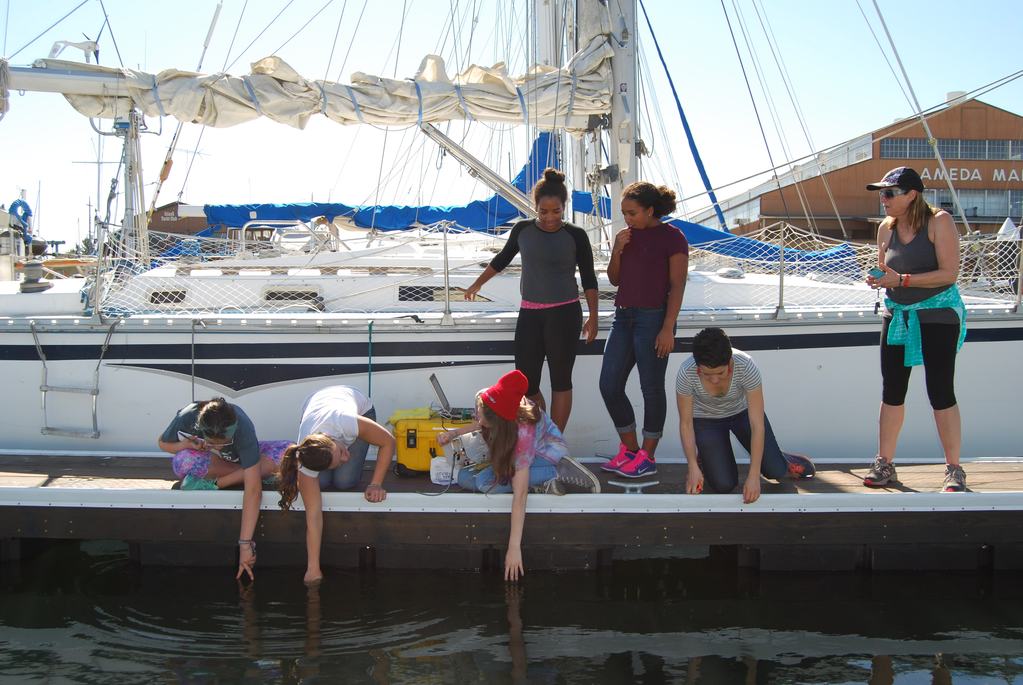 What is your next project and what are some aspirations you have for the near future?

My next project is the most daunting I’ve ever undertaken. It’s to stay the course, and keep doing what i’m doing. An education company is not a big sexy draw for everyone, but it’s important. With 100 girls through the program, and taking leadership roles as mentors during each new camp, I’m so happy to see Girls Underwater Robot Camp growing. Now the question is, what next? I struggle with the next steps, just like anyone halfway down a path with nothing but mountains to climb in front of them, but I’m ready to scale up GEECs to reach thousands of girls the world over. I’m open to suggestions :)

Or they can follow our various adventures and expeditions on OpenExplorer.com, and then start their own!